Look what was posted about Jesus on Snapchat

The Search for the Real Jesus Christ

Who was Jesus Christ? Was he God or merely a man? Was he a smart moral teacher? Did he even exist?

Articles from all sides are produced every year in an attempt to answer these questions. They mostly appear around Christmas and Easter due to the importance of those dates in the history of Christianity. It isn’t a surprise given the importance of those questions and the impact of Jesus Christ on human history. Discovering the truth of Jesus changes our understanding of all of human history and all of eternity!

Now, if you aren’t familiar with Snapchat, one of its features is “Discover” which is like a news feed. It is here that you will find news about sports, pop culture, tending profiles, and everything in-between. National Geographic is one of many groups who have a feed in the discover section of Snapchat. They published the story “The Search for the Real Jesus Christ.” When you click on the story, it takes you to this next screen prompting you to complete a quiz. There is only one question to this quiz. Could Jesus have been a real person? If they have continued to hold your attention, the next step would be to swipe up and take their quiz. Here is the following screen.

Could Jesus have been a real person? Which one is it? Here is their answer. 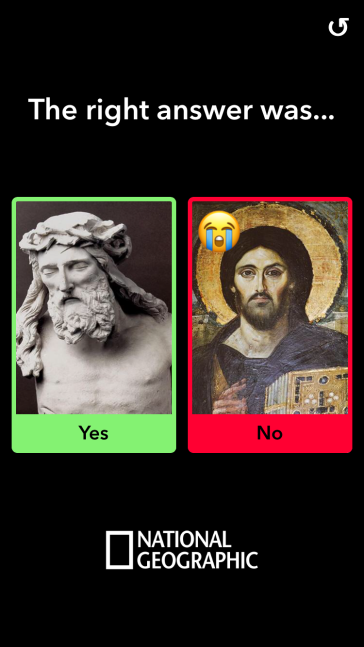 Chose “yes” and you get a smiling emoji indicating your correct answer! A “no” response leads to a red square with a crying face for getting the wrong answer.

This was a bit of a surprise since I normally see published articles that doubt the historicity of Jesus. The surprising part of this is that the existence of Jesus isn’t doubted by mainstream scholars but is commonly doubted by popular publications. Since this is a popular post, I expected to see the opposite. However, here is the quote that concluded the quiz.

It is true that mainstream scholars don’t doubt the historicity of Jesus. Even one of the most popular non-Christian scholars, Bart Ehrman, affirms the existence of a historical Jesus. Here is his response to doubters in his own words.

So, what do we conclude?

Jesus existed. This doesn’t make Christianity true, but it should compel us to look further into who Jesus was. What we find is that there is strong evidence for the truth of the gospels and for his resurrection. These two facts lead to the best explanation being that Jesus was who he said he was, the Son of God.

One thought on “Look what was posted about Jesus on Snapchat”