What is moral relativism and how can Christians respond?

Have you read anything about tolerance or morality lately in the news? It seems to be everywhere and one of the main “hot-button” topics today. Why is one group being so intolerant towards another? Why don’t they just change what they view as immoral so that we can all get along? The prevailing belief seems to be that each person has a right to their own opinion and that morality depends on the person. Each opinion is correct as long as you don’t force your opinion on someone else; then you are intolerant. The main problem is that there are two different views of morality. One view is that morality is relative and the other is that morality is objective. Relativism holds that moral values are subjective and no different from what you think about your favorite ice cream, movie, or sports team. Everyone deserves to have their own opinion on good and evil just like our opinion on our favorite ice cream flavor; I can like vanilla and you can like chocolate. Objective morality holds that moral laws do not change and are true for all people, at all times, and in all places. We are all allowed to have our own opinions on different topics and we don’t have to agree, but does this logic apply to moral laws? Should a discussion about our favorite food be looked at the same as a discussion about what is good and evil?

Let’s first look at the consequence of rejecting objective morals. “For to deny the existence or universally objective moral distinctions, one must admit that Mother Teresa was no more or less moral that Adolf Hitler, that torturing three-year-olds for fun is neither good nor evil.”[1] Under the umbrella of moral relativism, everything is decided by the opinion of the person committing the act. You would never be able to tell someone that what they are doing is wrong but only that you don’t like it. This can create a huge problem. Aren’t there right and wrong things in this world? Isn’t it right to give food and shelter to the homeless and wrong to kill them? However, in a relativistic world, it wouldn’t matter which option someone chooses. “When we abandon the idea that one set of laws applies to every human being, all that remains is subjective, personal opinion.”[2]

An argument used in responding to an accusation of relativism is that we have objective laws of the land. Governments or cultures create laws that are objective. However, it is impossible to create an objective standard for all people with governmental laws. Each government or culture creates laws based on their own opinions and this differs from government to government. We see this in that some laws in one state are not binding in another. Moral laws are only binding for the people in which the government is in authority over. “Since each culture has a different morality, none is justified in claiming that its own brand of morality is correct.”[3] One would be unable to say that what the Nazi party did was evil or condemn anything that happens in another government. This type of “society says” relativism is a problem, but there is one type of relativism that is more deeply entrenched.

So, how do we respond if we are discussing relativism with someone? What do we say when someone claims that there is no truth or that we should let them live with their own moral standards? The Christian apologist, Greg Koukl, suggests three tactics to address the issue. 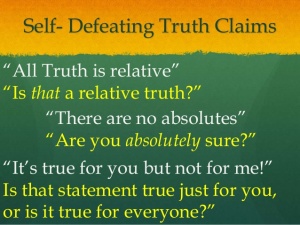 The first tactic is to show how their view commits suicide. We simply need to expose the flaw with intentional questions and their viewpoint falls apart. Relativistic slogans about morality and truth end up being self-defeating. Ask the question, “Is murder wrong?” If they respond, “Yes,” they are admitting that this is an objective moral law. Again, they may claim it is objectively wrong to murder because our government says so, but then you couldn’t claim that mass killings under any other government were objectively wrong. However, if they respond by saying “no,” it should be easy to expose the flaw. Look back at the many people who have been murdered due to shootings or terrorist attacks and they should agree that those acts were evil. People cannot truly live with this view of morality. 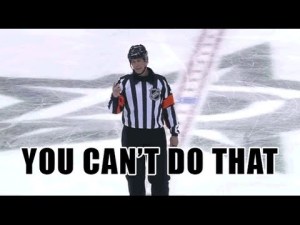 The second tactic is to press the person’s hot button or “take the roof off.” This is done by relativizing something that they hold close. For example, if a friend that holds to moral relativism is showing you his/her new car, it wouldn’t be objectively wrong to steal it.  When you attempt to drive away in their new car and they say, “You can’t do that!” it becomes objectively wrong. They wouldn’t like it if you drove away in their new car, but they couldn’t say that you ought not do it. As soon as they claim that it is wrong to do something, they are saying it is not only wrong for them but also wrong for you. It becomes objectively wrong and defeats relativism.

The last tactic is to force the tolerance issue. The only place we are able to truly tolerate someone is in a world where objective morals exist.[5] We do not tolerate people that we agree with. Tolerance is reserved only for those that disagree. If there are no objective morals and everything is relative to the person, then what is there to tolerate? We would all have our different opinions and everyone would be correct. When someone claims that you are intolerant for not viewing things like them, they are claiming that there is a right and wrong way to view morality and that you are wrong.

When we take a deeper look at relativism and ways to refute it, it becomes clear that objective morals laws exist. Why ought we to be moral? We ought to be moral because there is a moral law giver, God, and he has given us moral laws.(View my previous blog on the moral argument here) These laws have objective standards which make them true for everyone at all times and in all places because God is in a position of authority over all people. “Either we live in a universe in which morality is a meaningless concept and thus we are forever condemned to silence regarding any moral issue, or moral rules exist and we’re beholden to a moral God who holds us accountable to his law.”[6] The people who hold to moral relativism are forever condemned to silence because the moment they begin to deny values, they begin to affirm the value of their denial, and we are back to objective moral laws.[7]

7 thoughts on “What is moral relativism and how can Christians respond?”